I Wonder if Heaven got a Ghetto by Marcus Davidson 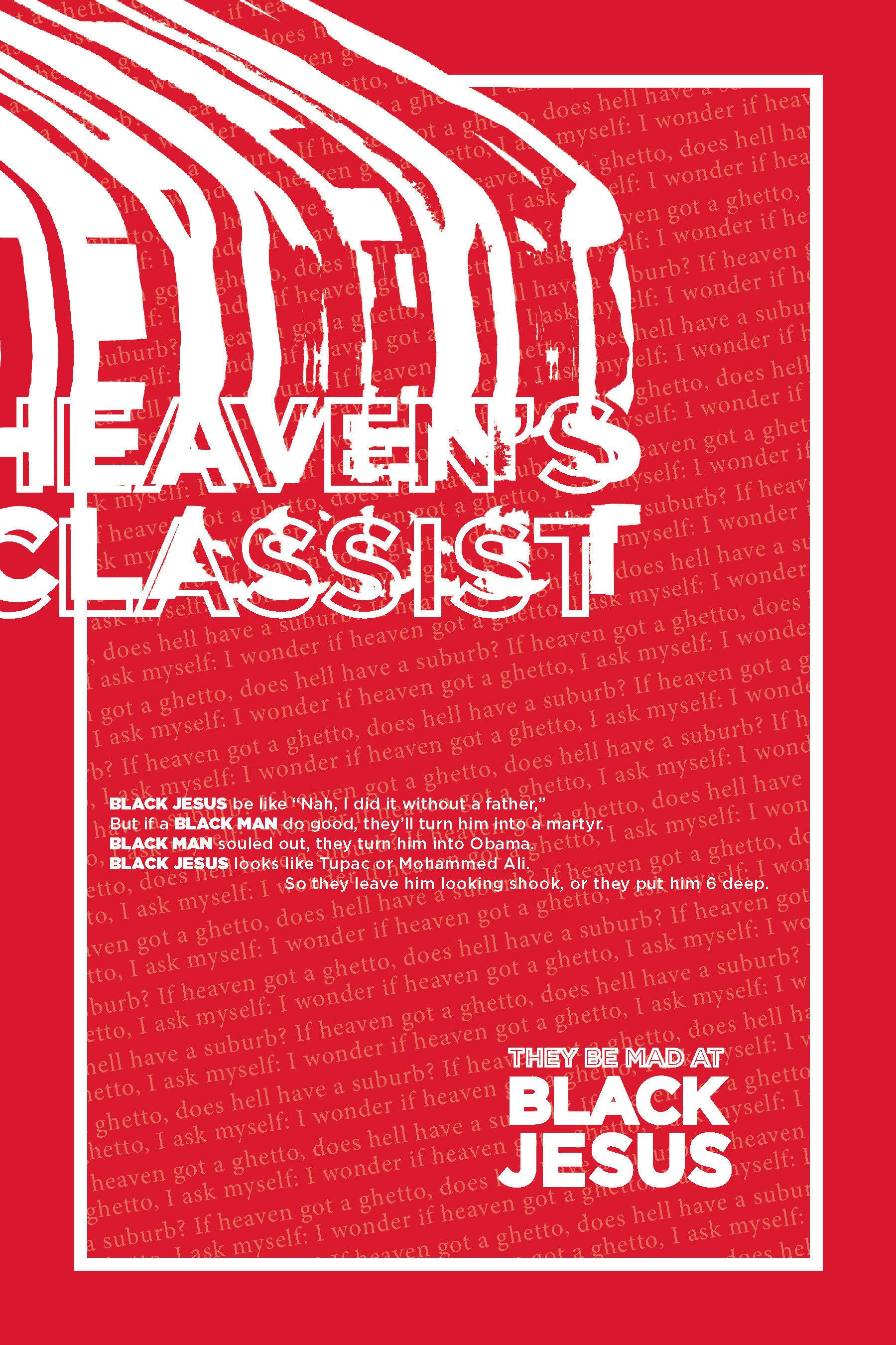 I Wonder if Heaven got a Ghetto
by Marcus Davidson

I wonder if heaven got a ghetto, I ask myself

I wonder if heaven got a ghetto

If heaven got a ghetto, does hell have a suburb?

Would biggie have to kill himself 'cause he don't fit in?

beer bottles, hoodies. They put us all together to create self hatred

Diamond rivers. Because behind beauty is slave labor.

The light you see, coming to heaven the bottom stages

The stairwell to heaven, is just the backs of poor people.

Everybody on the corner cus they gotta get a share.

I walked into heaven and heard an angelic voice. .

But the bible ain't tell us, that heaven had Detroit

And they all got section 8 vouchers

So our souls ascend and God offers us a white face . .

But we don't take it, so we don't end up in the right place

Imagine making it to heaven and you still too black,

Or you still too poor, so they still move crack.

My brothers up early, they grinding like folgers in the kitchen

They tryin' to capitalize, like taxes prison, and interest

Ain't no tree houses in the ghetto.

Empty pockets make us resent rich people in the ghetto.

They be mad at black Jesus, he complaining 'bout his problems,

But he never had a father paying his tuition fees for college.

Why is god seeming like a rich people sponsor

White Jesus be like "your mindset manifests your environment". . Even in nirvana?

He gets all the notoriety, he wasn't even a father

But we all spring off him, like we're his sons and daughters.

Black Jesus be like "Nah, I did it without a father"

But if a black man do good, they'll turn him into a martyr.

Black man souled out, they turn him into Obama.

So they leave him looking shook, or they put him 6 deep.

If his skin was white, they would turn him Ronald Reagan.

But they leave a prince for dead, when they see him elevating

Why they even care about complexion? It's 50 shades of the same skin

We all getting used. We entertain or we slang bricks

It's cus we tamed - inner

They be loving the jail system,

Now another generation doesn't have a male figure.

I never had a father, but I imitate the mail figure

Make an author meme of me, 'cause God looking like a buster

AYE GOD! Get this angel out my face.

With a badge on his chest and two halos on his waist.

White Jesus tried to whistle, through the hole in his hand

Tryin' stop them boys from shooting. . But it's a bullet hole in my mans

They don't care when the it happen to the poor, that's why we so damn angry!

They Fallon' us hot headed, we so damn Hades!

They don't got no school to prison pipeline,

They don't gotta question if those is fireworks outside.

Why they got new books?

Why they school buses?

Why they got white privilege? They all ain't even white.

Oh . . It's 'cause they got bread, and my family ain't eating right.

'Cause heaven ain't nothin', but the American hell

I wonder if heaven got a ghetto, I ask myself

I wonder if heaven got a ghetto