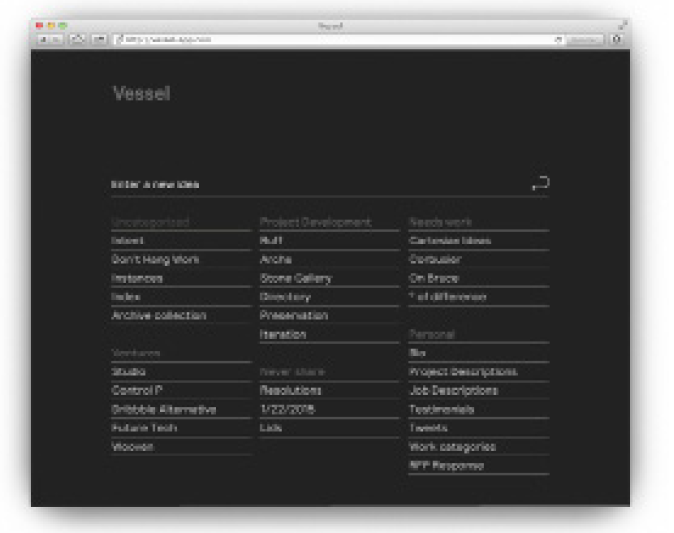 Architecture is what interests me about design, and I don’t mean buildings. Before Vessel I hadn’t ever worked on a project that I really had to ‘architect’. I had to create workflows, user types, and then think through the development of the project so that I could have a functioning prototype at the end of the year. I was forced to research a lot of different development environments and languages and learn a lot very quickly, which is a nice skill to have learned in school because now I have learned three programming languages since leaving school. These development environments have their own architectures that they are built on, and I had to solve the problem of how to put Vessel on top of them. So I guess I really had two interests going into the project, architecture and learning as I go, or faking it until I made it, which works occasionally. Those things were really the driving force behind all of Vessel, and the goal of having a place where I could write ideas down in the future.

Vessel was supposed to be an online repository of your thoughts and ideas as you developed them, and then a place to organize them however you wanted. It followed the same organization that I use in all my notebooks and I wanted to create a tool that was redundant enough to protect my thoughts and ideas if the system that is tracking them should ever be compromised, like your notebook lighting on fire. My main objective was really to just go through the initial product cycle of launching a product, from branding to the product itself. I set goals for myself through the project (things like understanding core programming language concepts by a certain date) and marked those as accomplishments.

My process was really straightforward when I look back on it, I wish I had looked at it in a more agile way. I was stuck in a weird phase for a long time thinking that there was some higher concept to Vessel and I was trying to articulate it in the right way, when really I just wanted to make a tool, that held me back quite a bit. I didn’t even think about my display until a couple days before the plans were do, it worked out because my parents were the only ones that took a picture of it.

There are two huge obstacles that I hit when I was working on Vessel, one during school, and one two months after I graduated. When I first started the project I was under the impression that there was something that I needed to fulfill. I thought I needed to show the department that I knew how to use lots of colors and a serif typeface paired with a sans-serif. Kristen sat me down one day and was basically just like, “lol, no, u do u,” and it was all good from there on out. It was a funk that lasted a few weeks and you don’t really have that kind of time when you want to build a fully thought out product.
The second obstacle was I got a cease and desist letter from a dude who got a bunch of money from Y Combinator to do more or less the same thing. He has like 40k followers on twitter and there just isn’t a way I could compete with a man of his stature. He is totally right and not a jerk at all. I hold no grudges.
I discovered the importance of always finding the next thing to teach yourself. It is ridiculously difficult to teach yourself something after you leave school and get a job, but because I did it a bunch during this project I feel like I’ve had an easier transition into doing it in the ‘real world’. Also, ‘real world’ is a terrible term. I hate it a bunch.

I didn’t realize until a few weeks ago that I hate designing websites. But crafting interfaces for a product is wonderful. My first job out of school I built a bunch of blogs for lawyers to not look so shitty and for quarries to gain the trust of neighborhoods they are about to shake to death. It was quite terrible. But then I got a job as a (self- titled) Lead Front-End Doer at a startup. I have much more responsibility than I did at my previous job, but I also have the freedom of assigning a task to myself and learning how to achieve that. Kind of like Vessel all over again.

1. If someone comes in and tells you to keep it real and don’t overbook yourself, do it anyway. It is your last real chance to mess up without too many bad things happening.

2. When you set goals make sure you are learning something to achieve each goal, it’ll help post-graduation.

3. You aren’t designing to fulfill anyone’s thoughts in the department, you are there to make something that you can be proud of and show off.

Gabe is currently working at etsy in New York.
See more of his work at gabekelley.com.