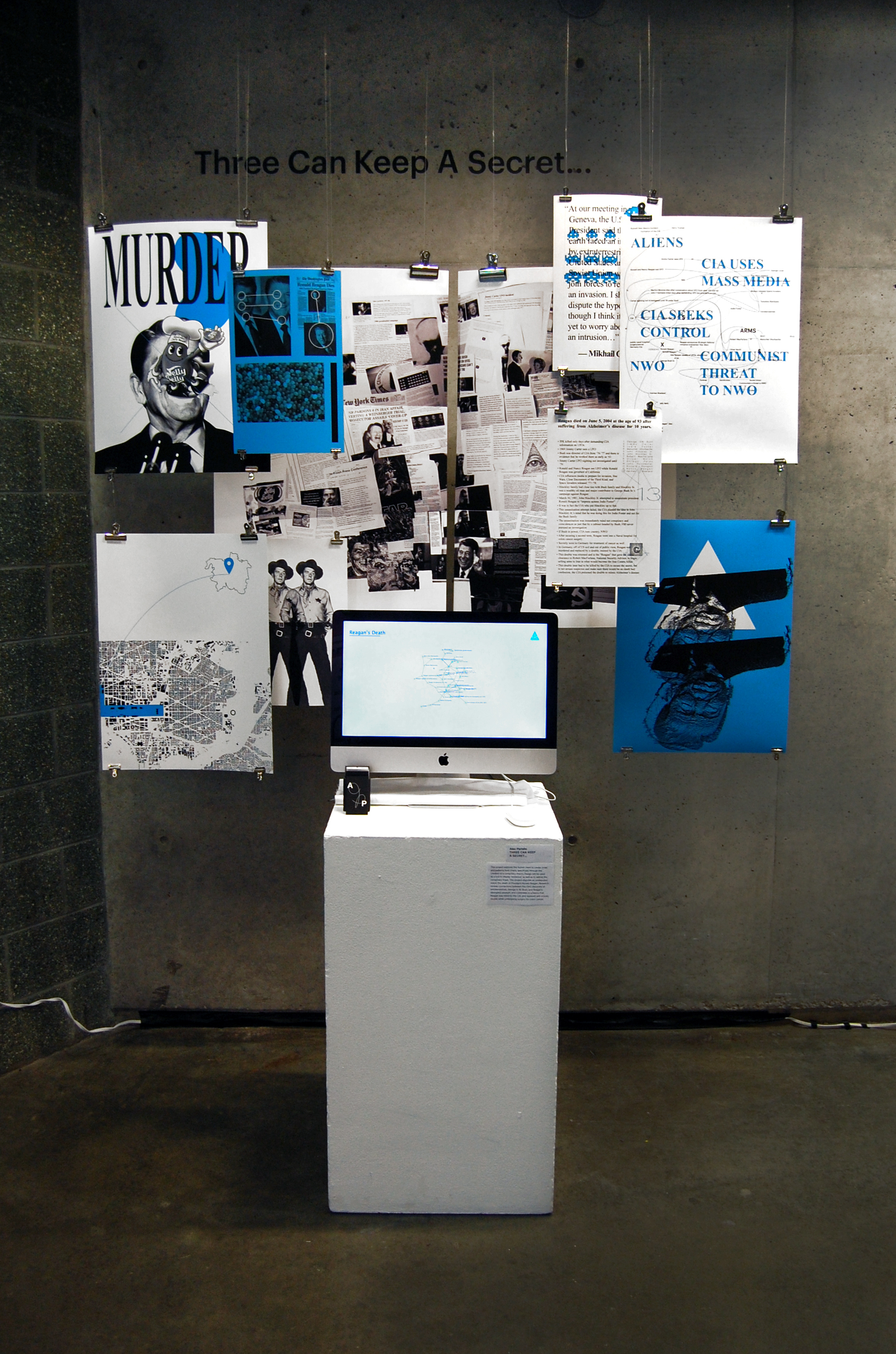 This project explores the human need to create order and patterns from chaos, specifically through the creation of a conspiracy theory. Conspiracy theorists often seek patterns in occurrences and relationships surrounding what seems like a chaotic event as order provides comfort and understanding to them whereas chaos is found to be disturbing. Conspiracy theories serve as a demonstration of how, if you are looking for such a pattern, you will be able to “find” one. For the purposes of this project, a conspiracy theory was created surrounding an uncontroversial event: the death of former President Ronald Reagan.

Design is used as a tool to display “evidence” as well as to satirize the conspiracy trope. Research reveals connections between the CIA’s discovery of extraterrestrials, George H. W. Bush, and Reagan’s attempted assassin, and culminates in a theory that Reagan was killed by the CIA, and replaced with a body double while undergoing surgery for colon cancer.

The exhibition display consists of multiple posters hung from the ceiling at different depths to create a layered effect along with an interactive digital piece created in Processing allowing the viewer to see connections between events and people as well as read details of the conspiracy based on what elements they click/drag.

1. Let it die: If an idea just isn’t working and you cannot defend it, let it go. I dropped a LOT of ideas for a long time because they just didn’t make complete sense. Every decision should have a good reason. Hopefully your Advanced II teacher will grill you and make sure your project and idea are sound and look for holes in them. If you don’t have a good reason or the foundation of your project has no substance, let it go and find something that works. Don’t get mad. Do better and think better. That’s the whole point of school isn’t it?

2. Keep a notebook: Keep all your ideas and thoughts in one place and let yourself ramble. Read design theory as well as non-design material. Talk to classmates. Ask your teachers what to read, they know more than you. Even for ideas you end up not using, coming back to them may help you flesh out a different idea later. Plus, it’s fun to look back once you’ve successfully done a great project and see how horribly lost you were (or maybe you won’t if you’re more prepared than I was!).

3.  Get out of your comfort zone: This is pretty standard advice I’m sure you’ll be getting all over the place, but it’s good advice. You’ve had prompts for projects for almost 4 years, now try something totally out there that you’ve thought about and never had a chance to do. Take the opportunity to learn how to direct a project (for yourself). Best case scenario: you make a great project that stays in your portfolio for years and makes you an interesting job candidate/human being. Worst Case Scenario: This project cycles out of your portfolio in less than a year if it even makes it in and you learned something from the experience.

Alex is a graphic designer and generally pleasant person currently living in his hometown of Baltimore, MD.
See more of his work at alexanderparlato.com.